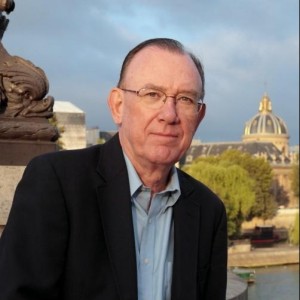 In the United States, Amazon is the colossus of the ebook market but elsewhere the big name is Kobo, the Canadian firm that manufactures e-book readers and offers four million e-books to read on them.

After two years of marketing Treasure of Saint-Lazare exclusively on Amazon (where it reached #39 on the Kindle best-sellers list), Alesia Press, my publisher, recently expanded its marketing to include Kobo. (You can find it here.) I thought I should know more about Kobo, so I made an appointment to interview Camille Mofidi, the charming Parisienne who is European manager for Kobo Writing Life, about the company, her job, and her plans — and why she thinks indie authors should use Kobo.

I’m really interested now, because my new novel Last Stop: Paris, the sequel to Treasure, will go to the editor in a few weeks and should be published in the first quarter of 2015.

I met Camille in the afternoon in a classroom of Lutèce Langue, the school that has been trying for five years to teach me French during the months I’m a Part-Time Parisian. The school is in downtown Paris a few minutes’ walk from the Pompidou Museum, Les Halles, Tour Saint-Jacques, and the sprawling Châtelet métro station. (I have also interviewed Eriko Pagnon, director of the school, and that video will appear soon.)

I first heard of Camille on Joanna Penn’s self-publishing podcast. Kobo is a sponsor, and Camille makes the occasional commercial appearance. You can see Joanna’s post about Camille and the Frankfurt Book Fair here.  Her home page is here. I recommend her work – she’s a real student of her trade, which extends far beyond writing.

My interview with Camille is a little more than five minutes long, and is subtitled. (If you don’t see the captions, press the “CC” icon at the bottom of the frame.)